When Arimee Gambill was 11-years-old she had seen a few of the Reif Nutcracker shows and she imagined herself as one of those dancers. Now as a graduated senior she has the featured role in the Spring Show as a top dancer in The Reif Dance Company. She also sees herself as a professional dancer, and come fall, that dream too will blossom as she joins the James Sewell Ballet Company in Minneapolis, Minn. as an apprentice.

“An apprentice is the most junior member of the company,” explained Gambill. “But I will be performing and practicing along with everyone else.”

Sewell Company dancers have a long history with Reif Dance as guest artists and program advisors. Reif Dance Company members have traveled to the cities to be part of training, exploration and shows for years. But Gambill is the first Reif dancer to be invited to join the company.

“It was because of guest artists (like the Sewell Company) that I first really understood that ‘Yes, people can really make a living as a dancer,’” Gambill said.

It isn’t just the inspiration to pursue a career path that Gambill appreciates in her experience with Reif Dance, it’s the diversity of training that she says is unheard of in any part of the country.

“The talent we have worked with has been amazing,” Gambill said. “Not just dancers but choreographers and a new wave of dance theory I’ve been exposed to – not the rail-thin ballerina body image. It’s eating healthy, being healthy taking care of yourself.”

Gambill is quick to point out that her growth was also part of what she called her “family” – her peers and older dancers she emulated. 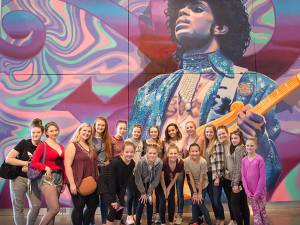 Arimee Gambill (second from left) with her “family” at a recent visit to the Twin Cities.

“I remember watching the big senior class in the program when I started,” she said. “I watched them as much as I could. I was in awe – being in a room with people who loved what they were doing.”

And Gambill has all the signs of being in love – with dance. She talks about the pain and hard work and not always wanting to put the time in everyday, but the dance draws her, beckons her.

“The family (fellow students) we push each other, challenge one another to be our best,” Gambill said.

Support is also felt from the rest of the school body.

“They come to our shows, support our work and acknowledge our talents,” Gambill said. “I hear things like, ‘Oh you’re the ballerina, right?’”

The Reif center itself also turned Gambill’s dreams into reality. Performing with top of the line equipment, staging, music, lighting and more. She hopes nobody will ever take it for granted.

“And are you kidding, look at this place! We have our own stage to perform without leaving the building,” she said. “It’s incredible.”

Aside from her insane love for music, Gambill says she adores the variety of choreography and movement she will experience with the James Sewell Ballet.

“James is so talented and quirky,” Gambill said. “The stuff he tries is always so cutting edge. He’ll never stop trying new things. I love that!”

It’s about to get interesting

Although she is over-the-top excited about her apprenticeship beginning in September, she is finding herself a bit weepy on occasion.

“I have to admit,” she confesses. “I did cry some after my last Reif Nutcracker and I’m probably going to cry after the Spring Show too.”

Her role in the Spring Show: A tale of two heroes, playing June 8-10, is Eurydice, the wife of Orpheus, who dies in the arms of her young lover and is swept away to the Underworld. Although Orpheus valiantly travels to the land of the dead to bring her back, in the end she is swept back into the depths never to be seen again.

“I’ve got permission in this show not to be happy all of the time,” Gambill said. “It’s a tragedy and I’m really excited to play this part. Expressing emotion in dance, letting movement express the pain – to be heartbroken; which of course is part of the human experience.”

Heartbroken, however, is not how Gambill is feeling about her future.

“My life is starting,” she says as she perks up in her seat. “When I dance, I’m a better version of myself. It’s who I want to be.”

Reif Dance is an exceptional training program open to ages 4 to adults. A special dance intensive begins in July for dancers 10-years-old and up with at least two years of experience. Learn more about the Dance Intensive Program.

Tickets to the Spring Dance Show are available HERE.