You can keep Oscar, give us The Larry

Home/Blog/You can keep Oscar, give us The Larry
Previous Next

You can keep Oscar, give us The Larry

The Reif performing arts center president, David Marty, received the Larry Award at a ceremony in St. Paul, Tuesday, March 6 during the annual Arts Advocacy Day. The ten-year-old award goes to unsung heroes in the arts community who advocate behind the scenes to improve arts access to everyone across Minnesota. 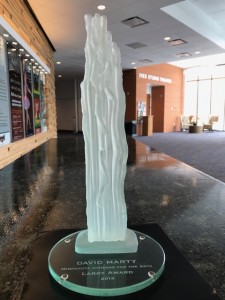 The Larry award is a glass sculpture by Minnesota sculptor Michael Tonder of Two Harbors, Minn.

The brainchild of Minnesota Citizens for the Arts, The Larry is named for Lawrence Redmond, who has been the council’s lobbyist and unsung hero since the 1970s.

“David has been a long-time arts advocate for not only the arts activities that take place in his city and his region but for the entire state of Minnesota,” said Sheila Smith, Executive Director of Minnesota Citizens for the Arts. “He has been articulate, determined and knowledgeable in his work with local and state legislators as well as with his fellow arts advocates and arts administrators from around the state. He actively engages those around him and helps others find ways to make arts advocacy a pleasurable and fun pursuit.”

Marty became the director of The Reif in November 1996, just 15 years after it was built and took production from a handful of shows to more than 50 top-notch national and international acts.

“David has been the drive behind where The Reif is today,” said Bud Schneider, Reif board member. “We have been blessed to have him in our community and as a steward of one of Grand Rapids’ wonderful treasures.”

In addition to expanding show offerings, Marty presided over a $10 million-plus expansion campaign, transforming The Reif into the stunning spectacle it is today. All very impressive, but for those who know him that isn’t the essence of why Marty deserves the Larry.

“David is amazing,” said Amy Stoller Stearns, Ex. Dir. Historic Holmes Theatre, Detroit Lakes, Minn. “He is an extraordinary leader. He has mentored so many of us and I continue to learn from him every conversation.”

Selfless passion for expanding the arts is his hallmark. Marty consistently reminds government and business leaders that a thriving arts community builds the economy and makes Northern Minnesota a destination for tourism for more than just outdoor activities.

“It is an honor for me to work for David,” said Deirdre Murname, Director of Reif Dance. “Minnesota and The Reif have been very fortunate to have his dedicated service for all these years.”

Marty plans to retire as The Reif president, July 1, 2018, but vows to stay involved and advocate for the Arts in Northern Minnesota and abroad.